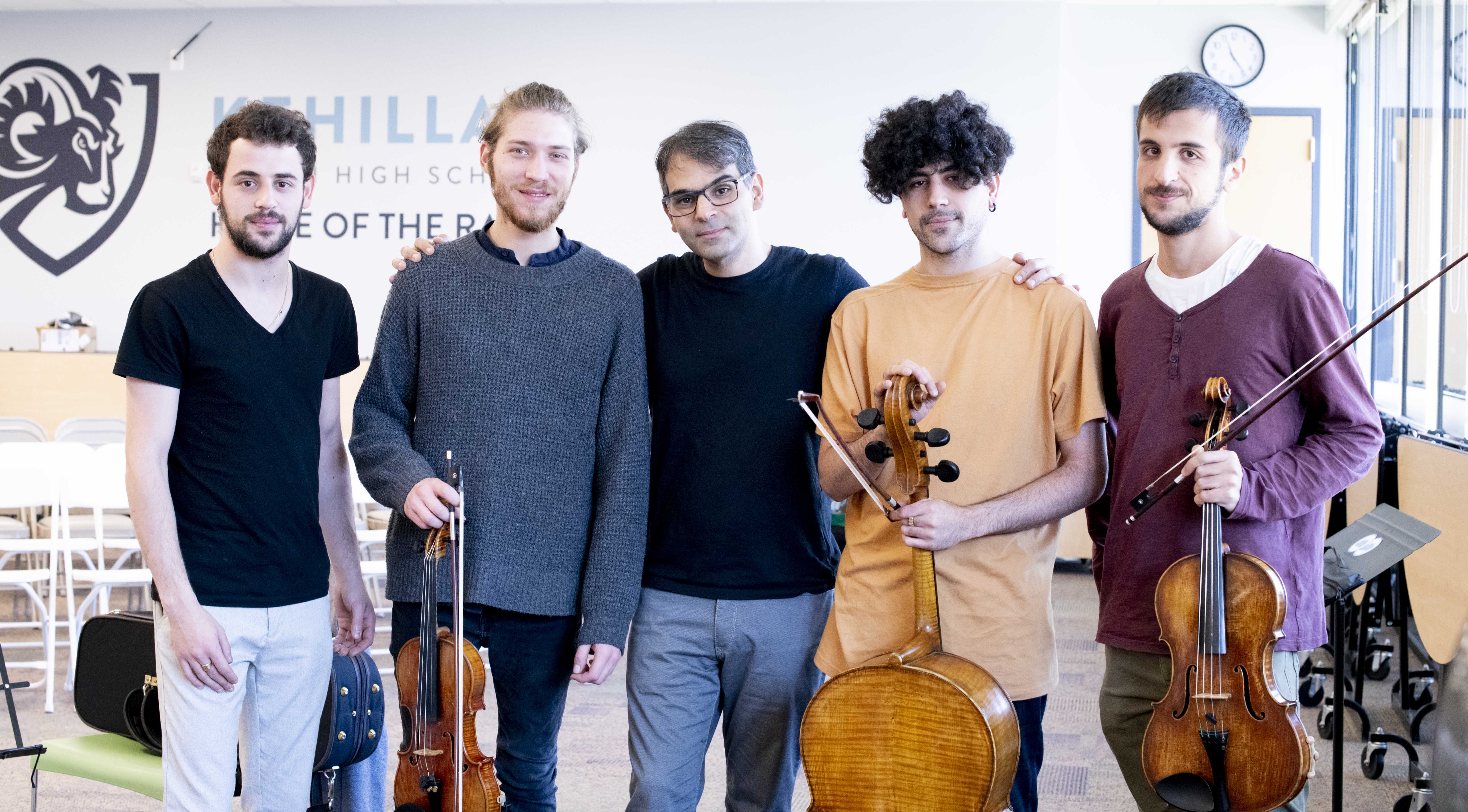 This month, the Polyphony Quartet brings together violinists Yamen Saadi and Edi Kotlyar with violist Yoav Yatzkan and cellist Mahdi Saadi for a series of performances on the US West Coast in Los Angeles and the Bay Area.

We hope you can join us at one or more of our upcoming performances:

The program will include selections from the following:

Yamen Saadi was born in Nazareth in 1997 and began his violin studies at the Barenboim-Said Conservatory in his hometown. After studying with renowned Israeli Philharmonic Orchestra Concertmaster, Chaim Taub, Yamen joined the West-Eastern Divan Orchestra in 2008 at the age of 11. The same year, Yamen made his soloist debut with the Haifa Symphony Orchestra. In 2015, he served as concertmaster of the West-Eastern Divan Orchestra under the baton of conductor Daniel Barenboim.

Yamen has won multiple scholarships from the America-Israel Cultural Foundation and was awarded First Prize at Israel’s Paul Ben Haim Competition and Second Prize at the Clermont Competition. An international career takes Yamen to different festivals and halls around the world such as Carnegie Hall in New York City, the KKL Luzern, the Konzerthaus Berlin, the Kleines Festspielhaus in Salzburg, and the Jerusalem Festival. Yamen also participated in a Decca recording of the complete Beethoven symphonies.

Yamen is currently studying at the Barenboim-Said Academy in Berlin under the guidance of Mihaela Martin. He plays a Carl Becker violin generously on loan from Yehuda Zisapel. He was recently accepted into the Kronberg Academy, a renowned cultural and educational institution that cultivates and prepares highly gifted musicians for careers as international soloists.

Edi Kotlyar was born in Israel in 1996 and began learning the violin at age 7 with Professor Lev Mirchin. He continued his studies with Elena Mazor at the Buchmann-Mehta School of Music at Tel-Aviv University. At the age of 13, he won first prize in the young musicians competition in memory of Mordecai Turgeman. The next year, in April of 2010, Edi received First Prize in the National Competition for young violinists in Tel Aviv. In March 2013, he won First Prize in National Competition in memory of Eran Zoldan in Raanana. During his studies in Tel Aviv, Edi won First Prize in both string and chamber music.

Edi currently studies at Hanns Eisler Hochschule fur Musik Berlin with Prof. Stephan Picard and regularly performs with ‘Musethica’ projects in Germany, Israel, Spain, and Sweden. Edi was also a soloist with the Ha’sharon Orchestra, performed as part of the Kamerans Orchestra, and participated in the Eliat Chamber Music Festival in 2009 and 2010, the Perlman Music Program in 2014, and the Kol Hamusica Chamber Music Festival in Kfar-Blum in 2015 and 2016.

Edi is a recipient of the America-Israel Cultural Foundation (ACIF) Scholarship and is an Alumnus of the Keshet Eilon Mastercourse. He plays the “N.Vuillaume” violin, on loan from ACIF.

Yoav Yatzkan was born in Jerusalem in 1995. At the age of 9, he started to learn the violin and switched to the viola at 16, studying with Michael Gaisler. He studied with Chaim Taub and currently studies with Tali Kravitz at the Jerusalem Academy of Music and Dance. As a member of the  West-Eastern Divan Orchestra, Yoav has performed in Marseille, Sevilla, Berlin, Salzburg, Lucerne and Abu Dhabi. As an active chamber musician, Yoav has performed in Alice Tully Hall, Lincoln Center, the Richard Strauss Institute, and the Elize Palace. Yoav is also a member of the Musethica Israel Quartet and participates in their educational activities.

An engaged student, Yoav participates in the Perlman Music Program where he focuses on chamber music and has had residencies in Sarasota, Florida, and Israel. He has also participated in the Keshet Eilon Mastercourse and the David Goldman Program for Outstanding Young Musicians at the Jerusalem Music Center. Yoav has performed in masterclasses with Itzhak Perlman, Miriam Fried, and Hartmut Rhode, among others.

Yoav has received multiple scholarships from the America-Israel Cultural Foundation, a scholarship from the Barenboim-Said Foundation, and support from the Kempinski Young Artist Program. Yoav is recently completed his service in the Israel Defense Forces as an outstanding musician.

Mahdi Saadi began his cello studies at the Polyphony Conservatory in Nazareth at the age of 12. Only four months later, he played his first concert for King Abdullah of Jordan. Mahdi went on to study at the Ljubljana University in Slovenia, Tel Aviv University’s Buchmann-Mehta School of Music, and the Barenboim-Said Academy in Berlin.

He performs regularly in both chamber music concerts and orchestral concerts in Israel, Europe, and the United States, including the Andalucía Orchestra in Spain, the Cyprus Youth Orchestra and notably with the Polyphony Ensemble during its debut US tour in June 2011.  He also played with the Galilee Orchestra, the World Orchestra, and the Branimir Slokar Academy, known as the Mio Orchestra.

Mahdi is a two-time winner of the Keren Sharet Foundation’s music competition. He plays a 1928 C.G. Stewart cello on loan from America-Israel Culture Foundation.